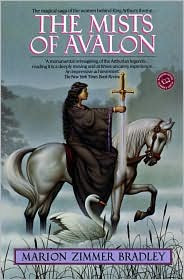 As many of you wonderful Books for Breakfast readers know (because this has been recommended for three years), this book is about the Arthurian legend. However, the twist is the old Celtic/Druid tales, as well as the legend told entirely from the women's point of view.
I have studied the lost Druid training of the "Isle of Mona," and I wonder how much could be truth. Or, is it a form of truth that cannot be proven other than in faith? Either way, I was hypnotized by this epic book. At times, the actions of the characters angered me, but this was the purpose of the novel. Such strangely beautiful writing, as well.
Are the other books in the series (and written with her sister-in-law) comparable? How odd that I felt a sense of loss when I read the epilogue and learned that Marion Zimmer Bradley had died two decades ago. It had been like finding a new friend.
4.5 out of 5.0 Green Mists.
Posted by Kristin at 9:44 AM

Email ThisBlogThis!Share to TwitterShare to FacebookShare to Pinterest
Labels: 4, historical

He also died young. Faulty genes in that family.

This book is my favorite out of the whole series. To me, the other books do not compare.

I've reread this novel several times, but I never felt the need to reread the others. I'm glad you liked this - after your Helen of Troy review, I picked up Marion Zimmer Bradley's The Firebrand which tells the story of Troy from Kassandra's view. It wasn't as good as The Mists of Avalon either but if you are interested in reading more about Troy, it wouldn't be a bad choice (I know I mentioned it then as well, but I can now actually confirm that it was good having read it recently).

Interesting... I was about to put "The Firebrand" on my to-read list, but it is already there. Now, it has been moved up. ;-)

I've just reread "Mists of Avalon". I think at the end of the day I really like it. But, while the story and the writing is extremely entertaining, the 2nd wave feminist politics become grating by the first hundred pages. We get it. Goddess Worship. Revolutionary. But very entertaining and well written. "The Firebrand", however, is stupid. Again, the goddess worship theme, but this time it makes even less sense and will certainly teach you nothing about Greek mythology, which is awesome.

Have you read anything by Robert Holdstock? I just finished a 3 book cycle called (together) The Merlin Codex -- I'm seriously disappointed I never heard of Holdstock til he'd died.

You know I'm fascinated with anything that has to do with mythology, and Holdstock takes what I think of as traditional mythological ideas and turns them on their head.

Kristin, I love, love, love this book. It is the best 1,000-plus pages I ever read and I will always be thankful to the person who recommended it to me, as I am thankful to you for recommending the Help. God, I couldn't put that down.

I wanted to speak to you about the other books in this series. I really liked all of them very, very much, and my favorite is The Forest House. It is a forbidden love story, and I felt a connection to Eilan, the main character. The end moves you to tears. I read it in about 4 days. I don't think you'll be disappointed and the characters won't anger you too much. ; )

Just to tell you Jason there are no faulty Genes in my family, Pauls brother lived to 76 I know you did not mean any harm
Jay