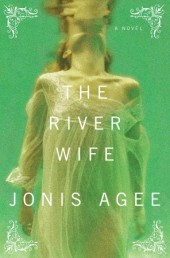 Annie Lark's Missouri house pins her to her bed after a horrendous earthquake of biblical proportions; in fact, her family leaves her there while trying to save their own lives. In 1811, they believe this is a sign of God's displeasure, but all Annie wants is a drink of water and relief from the pain in her legs.

A French trapper, scavenging the empty homes, finds and frees her from imminent death. They live together as man and wife through years in sod houses until he builds a farm on the river called Jacques' Landing. Her stumbling about on the thonk-thonk of crutches is powerful enough to imprint itself on future generations.

This book stretches between the time of Annie to other lovers of Jacque after Annie dies. They all write their stories in a journal that the "modern" woman - Hedie from the 1930s bootlegger time - reads and frets over. All of the women write about the ghost of Annie, limping away on her crutch, peeking in the windows at stressful times.

It's a mammoth production, as broad in scope as it is in depth. The women are all different in attitudes, gratitudes, and platitudes, but all are fallen by their love for the wrong men.

Beautiful descriptions and plotting throughout. Finally, a book I'm pleased to review.

Email ThisBlogThis!Share to TwitterShare to FacebookShare to Pinterest
Labels: 2007, 4

“I have made my world and it is a much better world than I ever saw outside.” - Louise Nevelson

After committing myself to BBC's world news, I've often clicked on the different tabs to check the view from other formats. BBC online is pretty uniform in its approach to news, so I didn't see much variation, but when I checked out MSNBC - an old haunt - I noticed a new option:

Here is all of the news that is lovely, I thought. Here is where I can bookmark the page, awaken and greet the day with happy-happy-joy-joy news. I clicked on an article:

Our web servers cannot find the page or file you asked for.
The link you followed may be broken or expired.

Click your browser's Back button to return to the previous page.

If it's any CONSOLATION, this book won the 2007 Toronto Book Award. As a CONSOLATION prize to the other authors, know that you didn't have a chance unless you wrote about Torontonian (yes, that was the official word) history.

But this is not a CONSOLATION to readers of the book who reside elsewhere. Instead, you must read it yourselves to understand the heart-wrenching CONSOLATION of reaching the end of the book to say...

Was that annoying? Indeed. Now you have a sense for how I felt after reading this book and despising its characters.

Email ThisBlogThis!Share to TwitterShare to FacebookShare to Pinterest
Labels: 0, 2007

First, may I say that The Dive from Clausen's Pier was brilliant. Not as good as my friend Becky's version of a similar event, but close.

So, is this the "sophomore slump"? I didn't have this on my list of to-reads, but Clausen's Pier stuck with me for so long that I immediately scooped this up at the library.

Liz and Sarabeth live in the SF Bay area and - surprise! - have been friends since puberty. Events in Liz's life lead her to lean on Sarabeth, but Sarabeth can't deliver those friendly feelings.

Blah, blah, can't even write an interesting post about this book.

Email ThisBlogThis!Share to TwitterShare to FacebookShare to Pinterest
Labels: 1, 2007 Matilda, a 13-year-old native of the village of Bougainville, follows along as her teacher, Mr. Watts, reads aloud Great Expectations. It is the best way to forget about the "redskins" who burn down her village and the boys who have left the village to hide in the jungle.

A story about New Guinea and Australia's invasion of the Bougainville property in 1990 (heard of it?), it is also a story of survival through invisibility. The story allows the students to be hidden from their families, and Mr. Watts, the last white man in the village, uses it to hide the discomfort of his life.

It's a short book, more novella than novel. With a severe reliance on Great Expectations, it seems that the author could have provided more to the story. The metaphor of invisibility worked for Jones, as well.

Thank you for recommending it... I had expected superfluous language and irritating imagery. Instead, I was surprised by the descriptions of heartache and heartbreak.

When I am left with questions about a book, I know it was a healthy, meat-and-potatoes read. As Anskov said, I finished it and felt satisfied.

Email ThisBlogThis!Share to TwitterShare to FacebookShare to Pinterest
Labels: 4, top 100

Who decides these things?

My personal favorite, The Gift of Rain, did not make the Booker shortlist.

I've tossed The Gathering back into the pile due to the library. Whiny and depressing. Mr. Pip drove me back into the arms of Anna Karenina. And At Chesil Beach was just okay.

My vote goes to The Reluctant Fundamentalist and the rest can go to pot.

“I do my thing, and you do your thing. I am not in this world to live up to your expectations.” - Frederick S. Perls

Jeez, y'all bored? This past week was a record number of site hits, as well as a full mailbox. Rock on... here are my humble replies:

Mmm, maybe. That photo is over a year old. I still have the ski jump nose and scowly face, but I've gone "ginger" (for Ducky in London). Botox and plastic surgery have changed the rest.

Can I have your AOL/MSN/chat name?

I've gotten this request frequently, which is very disturbing... I mean thoughtful and sweet! Thanks! But no thanks! I'm trying to work here.

I happened to see *blankety-blank* business and your name was attached. Is it you?

I loves the internets. Yes, I started my own business years ago. I'm reestablishing it right now, which is more work than you'd think. Fortunately, I have the clients first this time. I will share once I feel better about the website.

Why don't you post on your "Effin' Ranch" site?

I'm trying to respect the Dude's privacy a bit more. In Kristin code, this means I'm saving it for the book, where I will respect nobody's privacy.

What's with the song things in your last coupla posts, ladybird?

OK, first, if you are referring to those nasty ladybug beetles, I want no comparison. They squirt out smelly pheromones and cluster around cocktails. Hmm. Perhaps we are more alike than I thought.

The songs are a kid-bop thing I picked up from FoxyTunes. Unlike others, who will debate for several minutes before putting in the "now playing" emblem. "What will people deduce from my music choices? Will they think I'm wicked raw?" - I'm purposely leaving it. If I'm jamming to George Michael, you shall know thy truth.

Seriously, I'm thinking you're just mad that you lost the bet over whether I would read 150 books last year or not. Suffer!

Email ThisBlogThis!Share to TwitterShare to FacebookShare to Pinterest
Labels: random

Like When a Crocodile Eats the Sun, this is a vision-altering book for me. I truly believe in this quote: "War is God's way of teaching American's geography." This is why I am addicted to pages... not just the visits to world's unknown, but also visiting real situations unknown to me.

Pakistani writer, Mohsin Hamid, writes about the increasing frustration of his character, Changez, with American relations with India and Pakistan, amid his relationship with a depressed young woman.

The story is told in the second person, as if Changez is speaking to a nervous American visitor in a cafe throughout an afternoon and evening. I thought I would get annoyed - "I'm not afraid. I'm not a man." - but the use of this device increases the tension of the story. Who is this man? How does he fit in?

There is no immediate answer at the end, but one can assume by Hamid's careful plotting what the final action entails.

I've never read a book like this, at least, one where I could stand that second person POV long enough to enjoy the book. And it has made me more aware of the plight of Pakistanis. Another reason why I'm looking outside American media for news information.

As I'm reading the second chapter, I had an intense feeling of deja vu. Not the "I've read something like this before," but "I have read this before." But this is Peter Ho Davies first novel. Impossible.

I drove me friggin' crazy. Flipped through to the end, scanned online. Finally, I found it in his words of gratitude - the second chapter had been in a 2004 (?) edition of best short stories, edited by Barbara Kingsolver. Aha! I knew I wasn't going crazy. No comments from the peanut gallery.

Rural Wales, early 1940s. WWII has begun. A Welsh girl is pouring ales at the local pub where half of the bar is Welsh-speakers - farmers, quarrymen - the other half is British soldiers. She doesn't know that later in the night, something will happen that will (dun dun dun) change her whole life.

Reading like a series of short stories (unsurprising, since Davies has two other books of shorts), the novel brings together the arc of a German soldier, a lost British boy, and the Welsh girl.

I predicted the ending by the fifth chapter, which isn't a problem if the journey to the finish is worth it. There were some moments where I felt the brilliance of the imagery and metaphor. But overall I would have rather stuck with that beautiful second chapter that was so memorable as to cause deja vu.